It was quite a spur of the moment purchase to be honest. I’ve always been looking at hi-resolution portable audio players and assumed that the one I’d eventually get would be one by Fiio.

Earlier this year, Sony announced a range of new portable audio players aimed at audiophiles including the gold NW-WM1Z (£2500, anyone?) as well as the much more affordable NW-A35. It’s at this point I have to say that Sony’s product naming conventions are terrible.

There aren’t too many reviews on the internet for this, so in a way, I was buying this blindly. So here are my thoughts on this hi-resolution audio player.

The NW-A35 has the thickness of an older iPod classic, but the overall footprint much closer to a Nano. Unlike other audio players, there isn’t a scroll wheel or front facing buttons. All buttons are placed on the side and the front is for the display panel only. The player is very light and comfortable to hold. It’s made out of a combination of metal and plastic. Good enough for the price, but don’t go dropping this in the bath or on the ground outside. The buttons are clicky and responsive. It has a very nice look overall. The range of colours is very nice and there is a cool ‘Walkman’ logo on the back.

On one side is a covered slot for a micro SD card expansion. The NW-A35 comes with 16GB of internal memory, but I’ve stuck in a 200GB SanDisk memory card for more space. 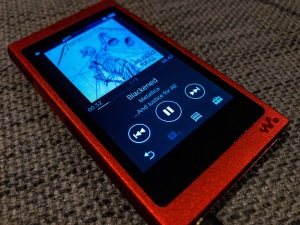 As stated previously, this is a touch screen interface. The buttons on the side allow you to play/pause, skip tracks and change the volume. Track selection and navigation is through the screen.

There is no sign of an Android operating system here (thankfully) and this UI is focused solely on finding and playing your music. The touch screen is responsive and music loads quickly whether stored on the internal or external memory.

My biggest and most pleasant surprise is with the quality of the display. It’s a 3-inch 800×480 WVGA display which doesn’t sound like much on paper, but it’s great for this audio player. Even the thin text in the UI is displayed clearly. Album artwork looks great, the back-lighting is even and it has a wide viewing angle. Whilst I doubt this is a laminated display, it sits close to the glass with minimal noticeable air-gap. The display is quite reflective though, which would be my only complaint.

It’s worth saying at this point is that this is an audio player only. No video playback, photo viewing, apps or games. You play your music, or you don’t. They are your options. I favour this approach to be honest as it means you have a clean user interface and more space on the internal memory. Let’s face it, the ‘extras’ you sometimes get on these types of devices are usually half-baked anyway.

You have a range of options for navigating your music library: by artist, album, genre, release year or composer. There are also further categories for playlists, Hi-Res (above CD quality), Folder navigation and SensMe, a system where music is automatically categorised by mood for you.

To take advantage of setting up playlists or using SensMe you need to use Sony’s Media Go application which annoyingly, is only available for Windows PCs. No Mac support.

One big difference between this audio player and many others is the number of sound customisation options. There is a 6-band EQ with a number of presents and custom options. The EQ has an impact on the sound so you can tweak settings to your taste. There are also further options to upscale compressed or CD quality audio to the equivalent of hi-res audio. The DC Phase Linearizer allows you to have low-frequency responses resemble that of an analog amplifier. You can also select dynamic audio environments such as a studio or concert hall and you can normalise the volume between your different tracks.

I’ve listened to a range of music from different artists in both CD quality and hi-resolution FLAC as well as the demo tracks in DSD. I’ve used a pair of Sennheiser HD598SE open-backed headphones and I’ve generally been impressed.

This product is almost brilliant apart from one thing. It’s 2017 and Sony have insisted that this audio player is charged with a proprietary cable. No micro-USB or USB-C. It’s an annoyance as it’s one extra cable you need to take with you.

Overall, I can whole-heartedly recommend this audio player. It’s great value for money and in my option, superior to the increasingly popular players from Fiio.

I’m not going to re-buy music I’ve already bought, in hi-res format. I will buy more hi-res content in the future though. For now, I’m currently ripping my CD collection in FLAC like it’s 2004 all over again.

Buy the Sony NW-A35 from Amazon:

Enjoy this? Then please consider supporting me on Patreon. For $1 per month you will get early access to new videos, free downloads of my music plus other exclusive content.

My Name is Matt

Welcome to my place on the internet. I am a musician and teacher with an interest in technology and iOS music and video production.